The Four Phantoms in Concert 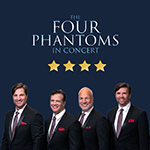 An extravagant celebration of the iconic music of Broadway and more, The Four Phantoms In Concert brings together four Phantoms from the Tony Award-winning The Phantom of the Opera for an unforgettable night of entertainment. The Four Phantoms features an extraordinary quartet of performers, including Brent Barrett, John Cudia, Franc D’Ambrosio, and Ciarán Sheehan under the music supervision of two-time Grammy Award-winner David Caddick and music direction of Ryan Shirar. The Four Phantoms are joined by special guest Kaley Ann Voorhees, one of the youngest sopranos to play the role of Christine on Broadway.